“He loved, beneath all this summer transiency, to feel the earth’s spine beneath him; for such he took the hard root of the oak tree to be; or, for image followed image, it was the back of a great horse that he was riding; or the deck of a tumbling ship – it was anything indeed, so long as it was hard, for he felt the need of something which he could attach his floating heart to; the heart that tugged at his side; the heart that seemed filled with spiced and amorous gales every evening about this time when he walked out. To the oak tree he tied it and as he lay there, gradually the flutter in and about him stilled itself; the little leaves hung, the deer stopped; the pale summer clouds stayed; his limbs grew heavy on the ground; and he lay so still that by degrees the deer stopped nearer and the rooks wheeled round him and the swallows dipped and circled and the dragonflies shot past, as if all the fertility and amorous activity of a summer’s evening were woven web-like about his body.” 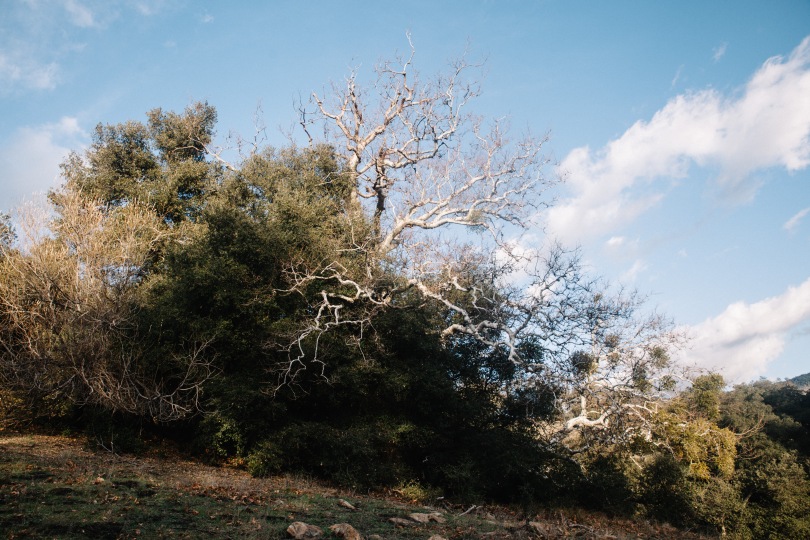 There is a man I see around town.. I’m not sure whether he is homeless, but it is clear that he struggles with mental illness. His black hair is wild and wavy, his aura a seventies-era mixture of Carlos Santana and Frank Zappa (without the mustache). Yesterday he was at Balboa Park, tipping over trash cans and trying to balance them on their edges. By the time I left about 30 minutes later, he had succeeded, as one concrete can stood at a strangely perfect 45° angle. I’ve seen him crying madly, rocking back and forth with his head between his knees, I’ve heard him screaming far-out things about the planets and stars and our place among them, I’ve seen him walk in predetermined circles, as if orbiting an invisible sun. Tonight he sat quietly at Whole Foods Market in Hillcrest, slumped forward, head in hands, fresh-pressed green juice and empty bottles of coconut water before him, a bag of organic produce by his side. Though his body was still, the very air was charged and vibrating around him, and it seemed clear that he could never really be still, despite his efforts to compose himself, to nourish his body with healthy things. I considered this with a heavy heart, while the moon continued to wane into the shape of a half-broken halo, somewhere up there in the dark heavens, beyond the city lights.